Having visited the Waveney Smallholders festival at the weekend, and seen their vast array of rare breed poultry I just had to delve deeper into the world of the Bourbon Red Turkey, such was I struck by their relaxed nature. 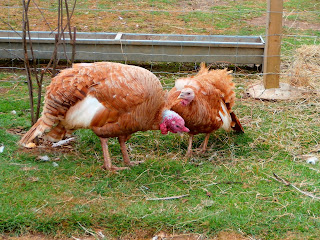 I know a few smallholders who always fatten some turkeys on their plot for Christmas, but are almost never seen between January and June, and are almost always Norfolk blacks or a Bronze variety.  So when I came across the majestic Bourbon Red turkey at the festival I had to take a closer look.

They are included on the Rare Breeds Survival Trust 'at risk' list, but the poultry list is not categorised like the sheep, cattle etc, lists are.

They originate from Bourbon County, Kentucky and enjoyed popularity here in the UK in the 1940's and 50's.  It is a cross between the Buff, Bronze and White Holland breeds with rich reddy brown feathers, white wing and tail feathers, the tail feathers being tipped again with red; body feathers on the males can also be edged in black.  The throat wattle is red which is able to change to a bluey white.  Mature weights for males are 15kgs and females 8kgs, giving a smaller carcase weight for the table than what people are used to.  The two I met were standing in front of a large group of people, not bothering about us a jot.  They are very personable birds, becoming tame with people, but can attack if they feel threatened; certainly the one's I met didn't look harassed at any stage, they seemed relaxed by our company.

This breed has unfortunately gone out of fashion, the favour being taken by the plumper, less gamier tasting birds such as the large and broad breasted White turkey, the majority that tend to get eaten at Christmas. They are an active, athletic bird, having highly developed leg muscles on long legs, and they love to forage and fly.  They have a richer taste than purely white turkeys; the breast is moist with a tastier flavour and have lots of brown meat.  They are slower growing than say a goose or a standard white turkey, but then it is an old fashioned, more traditional breed, having been around since the 1800's.

I was impressed by the two I met on Sunday and would love to try some here, even Fortnum and Mason were selling them at Christmas 2010, (from £80 a go I hasten to add), and what's good enough for them ..... 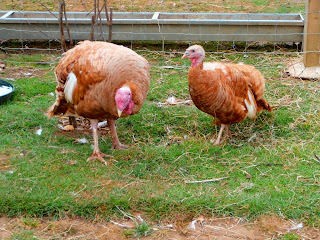 Posted by Angela Blackburn at 20:37