Interview with a Smallholder

I met Mik and Gill Bedson in their warm and cosy kitchen at Chapel Farm, Suffolk, over coffee and biscuits to chat to them about their lifestyle.  I wondered if they had any links to farming or smallholding.  The answer to that question was ‘No’, only Dads who grew vegetables.  Their passion came from wanting a better life.  They weren’t happy with the way food was being produced in this country – mass produced, factory farmed, with seasonality disappearing altogether. 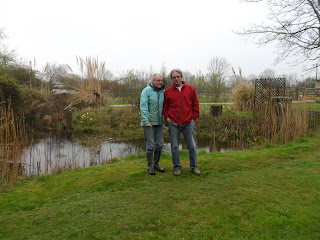 Roll back the clock to 2004, Mik and Gill are living in a small village, near Leighton Buzzard in Hertfordshire, both are commuting to London, five days a week.  Mik is working for a telecoms company and Gill, a health company.  In the small back garden of their country cottage are some hens, home grown vegetables and the occasional two weaners, ownership being shared with friends.

Mik is then given an opportunity of a lifetime, to go and work India, so Gill resigned and off they went.  As she had no need to work, plus household servants, Gill developed a passion for Art.  This passion for Art stays with her after three and a half years in India, when they decided to come back to the UK.  On their son’s advice they moved to Suffolk, because it’s a ‘nice’ county, close to their children and still within commutable distance to London for Mik’s work.  Gill decided not to go back to work, to concentrate on smallholding and developing her art.  I asked them if it was a joint decision to smallhold.  They both agreed it was, although slightly more biased towards Gill as Mik was working full time.

Chapel Farm was purchased in 2008.  Five and a half acres of gently sloping grassland, a large veg plot and fruit trees, a small orchard, plus various outbuildings for storage and a workshop.  Weaner pigs were purchased then a few sheep.  The pig enterprise was then expanded to include two Oxford Sandy & Black gilts for breeding.  Then the jobs started; the whole site needed stock fencing, the veg plot digging over, animal shelters constructing and copious amounts of equipment purchasing, all whilst Mik was still working in London. The mixed flock of sheep and variety of chickens

Then came the blow, Mik was made redundant and they had spent up.  So another big decision had to be made – what to do?  Should Mik go and get another job?  Or were they both committed enough to smallholding to make a go of it and become self sufficient as far as they could, and live off a smaller income?  Suffice to say, he gave up work!

Roll the clock forward, Gill is pursuing her Art career, Mik is working part time for a community project, based around producing local food, and they manage the smallholding between them.  Extra income is earned through selling their surplus meat and livestock.  All their garden produce is eaten fresh or frozen for leaner times.  They produce their own milk and cheese, courtesy of their small herd of pedigree English goats.  Pork, bacon and sausages are produced from Saddleback or Oxford, Sandy and Black pigs.  Lamb and mutton are produced from their mixed flock of sheep – Leicester Longwools, Lleyns and Jacobs.  Varying breeds of hens produce a good supply of eggs, meat chickens are produced for the freezer and about half a dozen Norfolk Black Turkeys are fattened for friends and family at Christmas.  All of their livestock are rare breeds, they produce wonderfully flavoured meat.  Gill uses them for inspiration for her art work, ‘because they are pretty to look at’, she says. 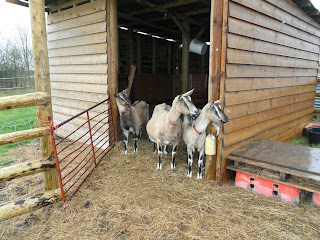 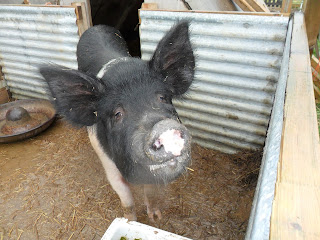 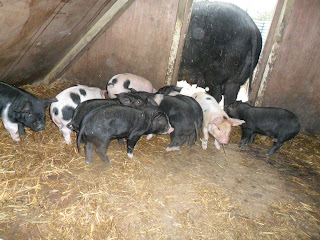 Saddleback sow (Blossom) and her piglets

They have had their ups and downs, it has not all been plain sailing.  The first lambing was a baptism of fire, truly awful, Gill recollects.  All four ewes had difficult births, multiple lambs, some lambs not feeding; twelve lambs from four ewes, a lambing never to be forgotten.  Having got used to a very lucrative lifestyle when Mik was earning, one of the worst things to get used to was learning to live on less money.  Lack of knowledge was never a problem, with the internet, books and always someone who knows more than you.  The emotional side of dealing with dead livestock is something that you never really get used to, they say.  Livestock you have nurtured over the years, ones you have brought into the world, there is nothing you can do when they die – heartbreaking. Another downside they both agree on is the winter weather; rain, snow, wind; the cold is just foul and then there’s the mud, ‘Say no more’, says Gill.  Being tied to the smallholding Gill finds difficult sometimes, you can’t just up and leave when you have livestock to consider; their children don’t always appreciate this when one of them has a crisis that needs mum or dad’s attention.

The best bits for them are numerous;  not having to get up and go to work for someone else; the flexibility of life; attending to jobs as they arise e.g. catching loose sheep; learning new skills, Mik says, building lambing sheds, dealing with livestock problems, medical or otherwise, he reckons it keeps him young.  In essence they feel they are time rich, cash poor.  I also asked them if there was anything they missed from their ‘old life’.  Mik likes his gadgets and due to the lack of spare cash, he’s upset that he can’t have the latest iPad, but certainly doesn’t miss the commute or the job.  Gill misses the thrill of helping people through her nursing, but volunteering for CRUSE helps with this.  Another question was if they were to start again at Chapel Farm would they do anything different?  Mik would’ve loved to have put in some sort of water collecting device, either sinking a tank or borehole, it’s all hosepipes, which is a nightmare when it freezes; field standpipes would have been a better idea.  Essentially they would’ve liked to have been more ecologically friendly all round, with a wind turbine, solar panels and a solid fuel heating system preferably, unfortunately lack of money put a stop to this.

Then the ultimate question – Do they make a living from smallholding?  The basic answer is, ‘No’. Essentially their smallholding income comes from selling eggs, meat and young livestock.  Selling the surplus covers the cost of growing the animals in the first place, plus the cost of slaughter and butchering.  This allows them to eat what they want for free.  Mik found the economies of scale quite difficult, too many pigs were not cost effective; there is no market for that amount of meat at their level.

I reach the end of my interview with them gaining a real sense of satisfaction from Mik and Gill, they are happy with their life and their lot, not wanting to change much at all.  Two more satisfied smallholders; this life really is a joy. 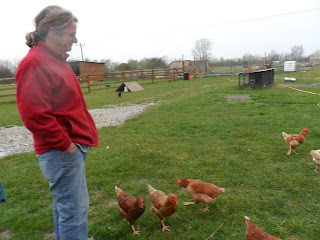 Proudly surveying his charges, on a wet breezy day

Posted by Angela Blackburn at 18:24