I've had two main pest problems in the garden this year, cabbage white butterflies and moles.  I've talked about cabbage whites in earlier posts and the tribulations they've given us, the moles on the other hand have silently and unknowingly caused problems of their own.

The polytunnel is 80% full of tomatoes and every single plant has been undermined by the moles tunnels, excavations and hills.  Watering has been eventful as all of a sudden you find the hosepipe stream disappearing into a tunnel instead of on the soil around the plant. 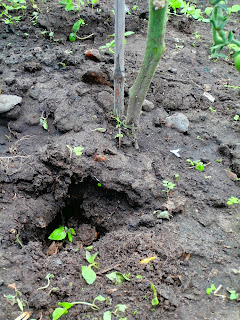 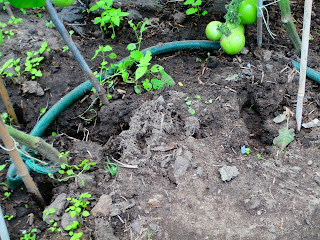 Now I'm an animal lover and understand that all animals need access to shelter, but if they'd just moved twenty metres further away then they would be in the field and could tunnel away to their hearts content, have huge 'houses' out there and keep me happy too.  So I did some research in the library this afternoon, to better acquaint myself with the blind little critters.

It seems they are extremely sensitive to sound and scent and so various deterrents tend to use this to their advantage e.g.

Those are the more normal ways apparently, there are some more obscure ones -

All this to me seemed a lot of hard work for a few little creatures that were only trying to keep their house in order, and/or set up house for the first time.  I think I'll just carry on squashing the soil down around my tomato plants to level out the soil and raking out the molehills, they've got to live somewhere. 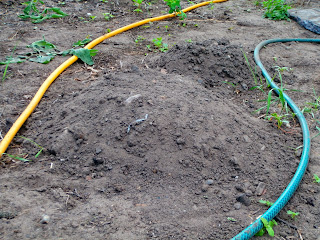 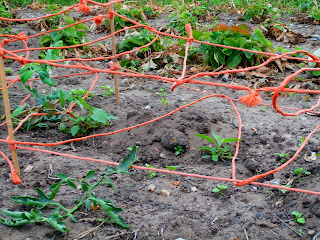 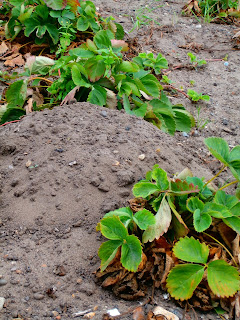 Molehills at various places in the garden - they certainly pick their places!

They do also have some endearing qualities, as they feed on chick beetles, cutworms, leather jackets and wireworms, and as I don't seem to have had a problem with any of these, maybe I should just be thankful for the moles and not all those listed above; they are after all a sign of good soil health as they feed on earthworms, so maybe I'm doing something right after all.