We moved the girls nearer to home last Sunday, and who was pleased to join them but Mr Onion.  It's that time of year again, when us sheep keepers think about next year's lambs. 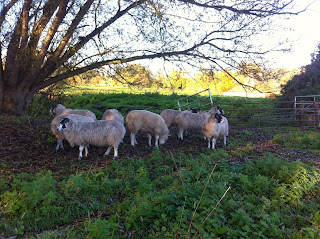 The gestation period for sheep is 144 to 151 days, and using what's called a Parturition Table, this then calculates the earliest day lambing will start.  So reading off the table, the tuppingdate, i.e. the date the ram was put in with the ewes, was 17th November, the table then gives lambing as 13th April, and as Mr Onion was doing his job within five minutes of joining the girls, well it won't be far off that date.

We have mule ewes here as it suits our system of grazing and management.  Lambing as early in April as we can (we are a bit later this year, we normally like to have the ram in by 5th November, which gives us a lambing date of 1st April).  We have summer grazing here of another 10 acres approx, which is under a Countryside Stewardship agreement, which means we can only graze it between 1st April and 31st October, but it does mean that the grazing gets a rest and it's usually green and growing well by 1st April, just in time for hungry lambs!

Having had rare breed sheep for a number of years, and not being pleased with the prices they were realising we decided to switch to commercial ewes and rams, and have not looked back, last year's lambs took top price at Norwich market.  We even sold a cull ewe for £65, four years after purchasing them for £85 each. It was a good decision for us, but maybe doesn't suit everyone.

Below are this years lambs, ready to go to market on 7th December. 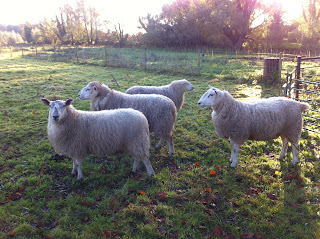 They normally weigh 40Kg or thereabouts, but are a bit lighter this year, due to the hot summer and therefore lack of grass in front of them, which is a shame as they were doing so well at the beginning of the summer.  We shall see when we get them to the market! Watch this space!