Now this isn't a well known vegetable in our house.  We have never grown it before, neither have either of us tasted it.  So when I decided to try and grow some, it was met with differing views!

I sowed a single row, in space between the broad beans and leeks.  In fact it was just a half row, the other half of the row being Pak Choi.  Unfortunately the weeds got the better of me in the hot summer, and the Pak Choi got drowned out, but thankfully the Swiss Chard struggled on and there are some good looking plants out there - 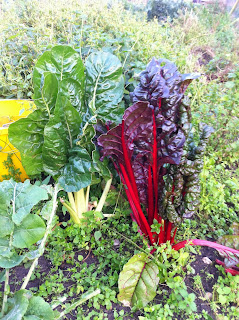 There is also a yellow too - 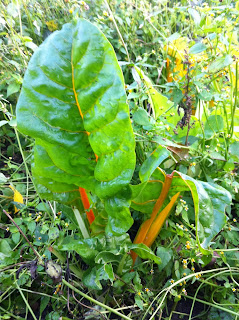 There really are very attractive plants indeed and I'm pleased to say that most of the half row has grown really strongly.  I am also planning to sow some more in the polytunnel once I've got the tomatoes out, which are at the moment still producing fruit.

It is a plant related to sugar beet - the stuff that farmers are madly harvesting at the moment, and is also known as leaf beet and spinach beet - the leaves often been likened to spinach, when lightly steamed. I just roughly chopped the whole stalks including the leaves, placed in a pan with some Kale, added 5cm of water and let the water boil then took it off the heat to finish cooking.  Swiss Chard contains a huge range of vitamins and minerals, like Kale (a winter favourite in this house), although mine did have a slight 'soil' or earthy taste to it, I don't know whether it supposed to taste like that, so I'd be pleased to hear from any of you that think otherwise.  I had heard the stalks are supposed to taste a bit like asparagus, but we haven't found that, maybe ours were too old. 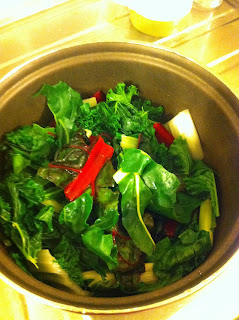 It's certainly a vegetable that I will have to persist in and look for other recipes to use it in.  What does it go well with?  How is it best cooked?  Your thoughts/views would be appreciated.