The last of the tomatoes

and cucumbers and peppers!

Yes, you've guessed it I've been in the polytunnel again this afternoon.

Now my husband and I have come to an agreement this year, that we are not buying those red, watery, tasteless things they call tomatoes in the supermarket anymore.  We shall wait until we are growing our own again next year, before we have any more, they are just a waste of money.  So when I told him today that that was it, I don't think he was all that impressed - no more tomatoes til next summer! 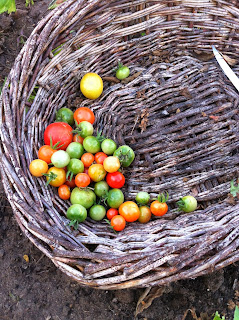 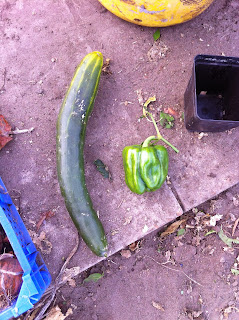 I've been doing some totting up of sales, aside from eggs, tomatoes and cucumbers have been my biggest sellers.

Cucumbers started selling in July and I have sold 33 of them at an average price of 60p each, some larger ones were sold at 70p and some smaller and late season ones were sold at 50p each, and this was all from two plants.

Tomatoes have done even better, 62 x 1Kg bags were sold at £1 per bag, both salad and cherry varieties.

This is aside from what we've eaten, given away, fed to the pigs etc.  So I don't think that's a bad harvest at all, pretty pleased with that.
Posted by Angela Blackburn at 20:20