Whilst up in Yorkshire last weekend, I picked up a brochure for the Beverley Food festival.  This brochure had been delivered to all households in the Beverley area and word had it that 20,000 people were expected to attend. 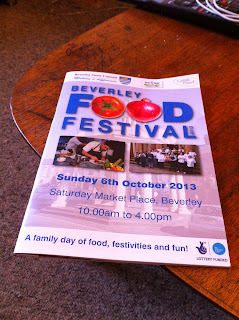 Now Beverley is an old-fashioned town that has a large market place which hosts a market every Saturday, selling everything you could imagine, from boots and shoes, to vegetables; clothes to wool; hoover bags to coffee.  So to hold a food festival is no surprise, the only surprise is that they haven't held one before.  I just wondered where all these 20,000 people were going to park!

Having been to the Norwich food festival recently I didn't bother to go to the Beverley one, preferring instead to wend my way home earlier.  Having been to the Norwich one, it hadn't entered my head that other towns would be doing the same thing I suppose, but then why wouldn't they?  It got me intrigued, so I had a good look through their brochure.  Yes, there are the usual suspects - preserves & pickles, fruit and veg, meat stalls, but it was the number of attendees that struck me - 90 stallholders in total!  Now that's an awful lot of food, but I suppose if it's between 20,000 folks it's not that much!

The advent of the food festival, I think can only be a good thing, if it educates people about eating the right sort of foods, in the right quantities, but it does have to be affordable to all.  The fact that it sells only 'local' produce is admirable; a marquee is also set up with cookery demonstrations from local, highly acclaimed chefs, presumably showing how to cook/serve the produce on sale. 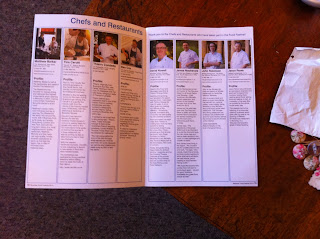 Now I love going to food festivals, love seeing the array of produce on sale, and dreaming of producing some of the stuff myself, usually the vast array of bread, (bread tends to be my downfall!), I'm just hoping it's not another money making/spinning exercise.  If it achieves better standard's of living through the health of the nation then I say - excellent, but I do think prices of some of the produce need to be a little bit more realistic, in order for the less well off to afford.  Do you agree? 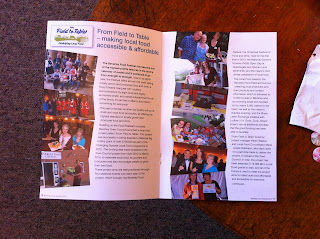 Posted by Angela Blackburn at 12:27