Had a busy day on the plot today, the first day it hasn't rained in about five I think.

Yesterday saw Colin the Buff Orpington cockerel take himself off on a little jaunt.  Now all the laying hens wander to their utmost delight wherever they want, including into the fields across from the house.  This involves going the long way round and over the sheep bridge.  They're not phased by it now and often wander across, but Colin here thinking he was a bit clever decided to follow them, then, couldn't get back!

Michael noticed him just before we were due to set off out for the afternoon, wandering around the field, crowing a bit, and with a few red hens around him and laughed saying, 'bet he won't be able to get back later!'  Sure enough once we got home and I was out and about feeding, putting horses to bed etc, he was standing in the same spot, looking very bedraggled as it was pouring with rain by now.

So off I traipsed across the bridge wondering how on earth I was going to get him home - it's a long way for a chicken.

I managed at one point to grab hold of him, but I only managed to grab a handful of feathers. 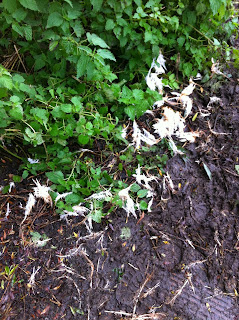 Off he squawked and thankfully at least ran across the bridge, not back into the field.  I followed him at a discreet distance, hoping he might corner himself.  He did indeed.  He stuck his head in the stockwire fence and realised he couldn't get his whole body through, so I managed to grab him from behind.  His squawking carried on, much to the alarm of Mr Onion (our Texel ram) and Red (our Dexter cow).

I carried him back to his hut and hoped he would be OK the following morning, he didn't look too bad, although rather bedraggled from the rain and consequent mud, but thankfully wasn't bald anywhere.

Checking him this morning, he was fine, phew!  Didn't seem any worse for his rainy jaunt. 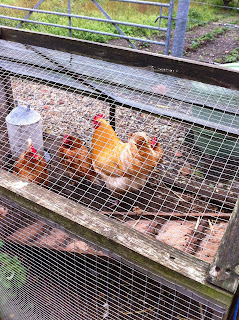 I did notice that when I let them out this morning, he didn't wander very far.  Don't think he'll be doing that again very quickly.  Bless him, I do think he's a bit lacking in the brains department!